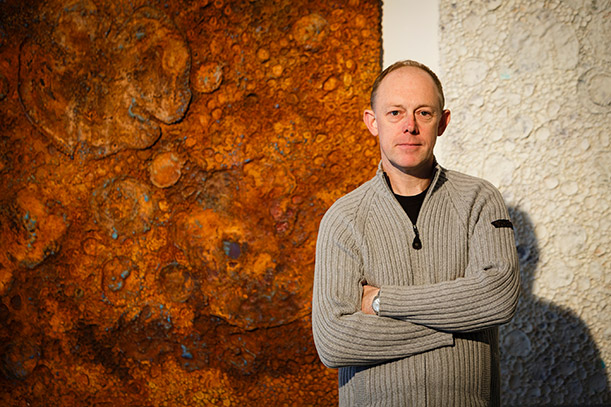 Dan Pyne’s practice is principally an exploration of surfaces. They are experiments in process that teeter between structure, control and self creating organic objects. His works often inhabit a space between sculpture, installation and painting, shaped as much for their haptic qualities as the visual. Colours evolve equally from chemical reactions as from the conscious choice of pigments.

Having trained as a scientific and medical Illustrator, it is unsurprising that geological, biological and chemical processes, and structures still feed and inform his work. They feel like an accretion of half familiar forms, reacting, growing, evolving and decaying. An evolutionary moment caught in time.

Through these forms Dan seeks to provoke questions beyond mere construction and elicit a primal response. One that raises thoughts of birth, life, existence, proliferation, decay and the relationship between the organic and non organic.

His current works seek to use this textural, abstract language to question our propensity to dehumanise fellow human beings.

Dan has stated that:

In theses fractured times we are once again diminishing the humanity of others. With the Patterns of Dehumanisation series I am seeking to create a number of dark visual metaphors that invite interpretation and question our own attitudes to one another.

Thank you for using
Themify Popup

This is a sample pop up. Themify Builder or Builder Lite (free) plugin is recommended to design the pop up layouts.